In Memoriam: William B. Carney

With great sorrow we inform that our director, William B. Carney, passed away the 5th of October, 2021. May he rest in peace. 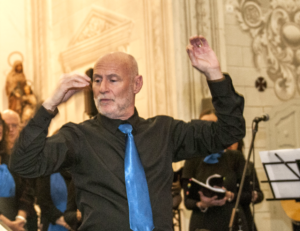 William Carney was a graduate of the University of Chicago and the Mannes College of Music, where he earned a Diploma in Voice and Opera. A twenty-year career as a concert and opera singer based in New York City included  tours of the United States and the Far East with the Gregg Smith Singers, Robert DeCormier’s Festival of Song Quartet, and Steamboat Gothic, a male quartet, and frequent appearances as an oratorio soloist. He has performed roles in more than thirty operas and musicals and has recorded Samuel Barber’s chamber opera A Hand of Bridge for Premier Recordings, Inc. After moving to Miami in 1994, Mr. Carney appeared with Florida Grand Opera, where he sang the role of Emperor Altoum in Puccini’s Turandot in 1998. He was a member of the voice faculty at New World School of the Arts (in both the Theater and Music Divisions) from 1999 to 2012. At New World he served as music director and/or conductor for The Marriage of Figaro, My Favorite Year, City of Angels, A Chorus Line, 42nd Street, Anything Goes, Carousel, and On the Town.

A resident of Sitges since 2012, Mr. Carney founded the community chorale Sitges Canta! The International Sitges Chorale in February 2013. He continued to act as a singing and “coach” teacher for singers and actors who want to improve their accent in English, as well as working as a singer, actor and professional speaker.